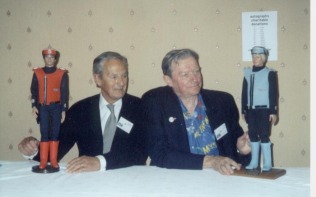 Where in the world can you combine talented guest stars, interesting production people, and friendly fans in an atmosphere of Old World elegance? At a Fanderson Convention, of course! Stand By For Action! was the Club’s 21st convention, but it was my very first. I’d been to many science fiction conventions in the States, but none of them prepared me for the unique qualities of a Fanderson Convention.

I expected a good hotel to host the convention, since I have never attended a convention that boasted less than this. But I was surprised by the quaintness of the Allesley Hotel (with its maze of rooms) and the general sweetness of its staff (who took the time to inquire about the length of our flight.) It was the perfect setting for the convention of a lifetime.

At the opening ceremony, our host Chris Bentley went through the scheduled programming with us. There was a great deal more happening than I had realized, so I had to make some choices right off. And although the programming took some unexpected turns (which any veteran convention-attender knows can happen), I was still able to attend nearly everything I had marked.

My first stop was at the Fanderson Sales table to pick up everything on my wishlist. I was forced to detour back to my room afterward to unload my treasures, then joined the group in the Features Room for a conversation with Graydon Gould, the voice of Mike Mercury in Supercar. I’d never heard of Gould, Mercury, or Supercar before, since I’m a fan of Gerry Anderson’s live action series. But I learned a great deal about the incredible talent and energy that went into all the Supermarionation productions, especially when Alan Shubrook came on a while later with his delightful behind-the-scenes special effects presentation.

Since I’ve always been a fan of Gerry’s live action series and never saw one of the Supermarionation shows until the convention, I was overwhelmed by the intricacy involved in working with the puppets. But what stunned me most of all was the model work. When I first saw UFO as a preteen, I thought those ships and mobiles were real. Even as an adult, it is difficult to accept that the actors didn’t actually climb in and out of the mobiles or chute into the cockpit of Sky 1. The marriage of live action and miniatures was so perfect.

After lunch I got in the autograph line for the actors from UFO. Both Ed Bishop (who played Commander Straker) and Dolores Mantez (who played Lt. Nina Barry) were there, and this was what I had come nearly 8000 miles to experience. I had been told that Bishop was quite amiable by several of my male friends, so I was rather surprised to find him brusque almost to the point of rudeness. But perhaps female fans unnerve him. However, Dolores looked as lovely as if she’d just left the show, and her gracious smile and warm manner more than compensated for Bishop’s lack.

The highlight of the afternoon was when Chris Bentley interviewed Gerry Anderson and Arthur Provis. As a preview to that conversation, he shared with us a rare screening of an early program Gerry and Arthur had been involved with back in 1955, You’ve Never Seen This. The audience was in stitches. During the wonderful conversation that followed, Marcus Hearn summed it up best by calling Gerry "England’s George Lucas." It was a special moment of recognition for his incredible imaginative genius. But Gerry has much more than Lucas ever could, since he has surrounded himself with an ever growing assembly of talent that is more family than staff.

Francis Matthews (Capt. Scarlet) and Ed Bishop (Capt. Blue) ended the day with a laugh. Between Bishop’s corrections to Matthews’ memory lapses and Matthews’ occasional Cary Grant impressions, it was a hilarious conversation. And Matthews ended the hour by giving Bishop a smack on the lips! Afterward, it was a treat to get pictures of them with their respective character puppets. The group shot of all the guest artists onstage together was a lovely idea, as well.

The 70's - 80's Costume Ball that evening topped off the day perfectly. I arrived late, after a convivial dinner with fellow science fiction fans, to find that the party was barely getting under way. The music and video program set-up by Chris King was phenomenal – easily the best dancing experience I’d enjoyed in a long time. The costumes varied greatly and included personages from other decades as well as 1970 - 80. I saw Wonder Woman, Leia and Luke, Austin Powers, a few Star Trek crewmen, a go-go girl, a Moonbase tracker (complete with purple wig), a Jawa, Obi-Wan Kenobi, the infamous Dr. Jackson from UFO, and a man I took to be Sammy Hagar, but who told me later that he was a character from some sitcom. There were also a few Tracys and Capt. Scarlets about to complete the turnout. After the party, several of us retired to the bar to rest our feet and get better acquainted.

Sunday morning came too early for those of us who’d danced all night, and the opening ceremony crowd was rather thin. Later, the room would be packed to capacity for the Stand By For Auction! Charity Event for Diabetes UK. We got to hear from directors David Lane and John Hough, along with Alan Shubrook, which was a real treat since they had all worked together on and off over the years and had many amusing (and sometimes harrowing) stories to relate. Alan summed up the entire interview by saying that teamwork was what made all their various efforts in production work out so well for the shows.

The afternoon wound down with a collection of unusual videos, all introduced by our completely straight-faced host, Chris Bentley. The titles included such gems as Space:1899, a silent picture tribute, and When Gerry Met Freddy, a hilarious look at a fictitious brainstorming session between Gerry Anderson and Fred Freiberger. There was the charity raffle draw to finish off the day, and Chris returned to the stage to thank everyone who came and helped, and to say good-bye until next time. My only disappointment for the day was that Gerry had left early, so I wasn’t able to get his autograph.

I had such a wonderful time at the convention that it took me a while to realize the main difference between this convention and my past experiences. I finally deduced that the biggest difference was the fans. Not only was I dealing with a much smaller crowd than I’m used to (about 300 compared to over 1000), but these fans were as interesting and fun as the guest artists, many of them being involved in professions or hobbies that keep them linked with Gerry Anderson’s shows. There were Key Wilson and Mike Wolff of Misc! Mayhem, who are doing the comic books for Supercar, Fireball XL5, and UFO. Also Dave McCoy, a notable artist who is also involved in the project. There was Phil Rae, who is the master UFO collector (even I had heard of him), as well as several fanfiction writers whose UFO stories I’ve read online. In a crowd that intelligent and diverse, it would have been impossible to have experienced anything but a really great time.

Thank you, Gerry Anderson, for memorable shows that sparked our imaginations over the years. And thank you, Chris Bentley and the rest of the Fanderson staff, for making these conventions such a joy to attend and letting us fans partake for a few short days in the wonder of being a part of Gerry’s family. I’ll be back.